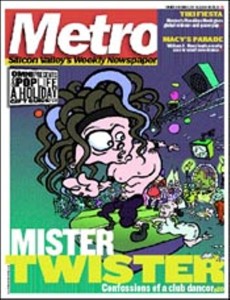 A couple of years ago I wandered into a bondage-themed nightclub looking for some good music and walked out with a job as a dancer. My descent into the weird world of fetish would provide many solid, pith-helmeted anthropological conclusions regarding the human condition.

IT WAS A DARK and stormy night. Literally. I had just moved to the Bay Area and was dead broke. I knew some people who worked the door at the Trocadero Transfer in San Francisco who told me the music they played on Wednesday nights was right up my proverbial alley and never mind that it was a bondage club–there were really cute girls with complex hair and tight, plastic clothing there. And I could get in for free. Free is good. And so off I went into a night that would change my life forever.

My first impression of the club: lots of smoke, lasers and torches. A chain-link fence surrounds the dance floor on three sides. A glance to the right shows a girl removing her top and putting her arm around a statue of a crying angel. She poses this way while a guy with alarmingly greasy hair snaps her picture. She then nonchalantly replaces her top and the two head for the dance floor.

A very petite girl sidles up to the bar next to me, alone, forcing herself to appear like she is having the time of her life, although she obviously is not. I feel sorry for her, sort of, so I try to strike up a conversation, asking her name. This quickly gets far more complicated than it really ought to be. She doesn’t speak a hell of a lot of English. After much verbal wrangling and screaming at each other over what seems to be an ever-crescendoing level of noise, it is established to some degree of clarity that her name is Yvi and she is an exchange student from Hamburg, Germany. I try to bring the dialogue to a quick close, but she has fingered me as a nice guy and wants to talk more. Our intercourse is, needless to say, somewhat problematic.

“So how long have you been in America?” I yell.

“How long have you been in America?”

God only knows what she says in reply, but I nod at her encouragingly like I hear and comprehend. She starts talking about something and seems to like whatever it is she is talking about because she keeps nodding and smiling excitedly. The truth is I can’t hear a goddamn word she is saying. But I nod every few seconds and laugh when she does. She seems to get a lot of enjoyment out of the conversation.

Three potent cocktails having been dispatched, I head for the main room and circle the perimeter of the dance floor. It is very dark, both literally and sartorially. Everybody’s hair seems to be bluish-black or some other color not occurring in nature. There are lots of fake breasts. Everybody is dressed in leather, lace or plastic. And no one can dance. I mean, not really. Some of them know a few steps, but none of them seem to have any real sense of rhythm.

The dance floor is more or less surrounded by a catwalk where the “beautiful people”–the people who never pay the cover, the people the DJ calls every week to make sure they’re going to show up, et cetera–dance. They are not so much dancing as writhing ecstatically. Four girls and one guy. Their respective dancing abilities (in my patently subjective opinion) range from OK to downright shitty. We’re talking about them having not only no rhythm, which can be easily compensated for by looking really damn good, but also no style whatsoever.

I quickly decide that it would be in everyone’s best interest if I just jumped onstage and did my thing.

But she keeps tugging at my damn boot like it’s her job (which, I was about to find out, it is). So I lean down to hear what she has to say, and she screams a line that (although I don’t know it yet) I will find myself saying literally hundreds of times over the next two years: “You can’t be up here–only dancers are allowed up here!”

Just what in the hell did she think I was doing, I ask her in slightly less severe terms.

“No,” she shouts back, “it’s for the club’s dancers–the employees!”

You mean these–these–poseurs are getting paid? I couldn’t believe it. Again, keeping in mind the cocktails, it should come as no small surprise that I, the normally shy guy who has never even asked a girl to dance, shout back with almost papal authority, “Why don’t we call this an audition?” She looks annoyed but then looks me up and down, slightly less annoyed, and says, “All right, one song.”

Heh. I feel a sense of victory, however temporary. So, for the next three minutes I dance like a pyromaniac on fire. Evidently I pass the audition. “My name is Colette,” she says afterward. “I manage the dancers. Meet me at the bar in an hour and we’ll talk.”

So, in an hour, I find Colette and her lovely outfit holding court at the bar. She is, as one would expect, surrounded by admirers of both sexes, not only because she is attractive, but also because she is management. She has status in the club scene, and in the club scene, status is very important. She sees me and smiles. “I’m sorry about being so rude to you at first–I didn’t know you wanted a job.”

“So here’s the deal,” she says. “I’ll put you on the schedule. You’ll be on every other week, $75 a night. Plus you’ll get a bunch of drink tickets you can use yourself or give to friends or whatever. Oh yeah, and you get to put two people on the guest list every week.”

GULP. It is with very mixed feelings that I drive to the club that second night. On the one hand, I feel pretty damned stoked. I am officially “cool.” On the other hand, I now have contractual obligations to fulfill that include getting in front of a couple hundred people while dressed in tight, plastic clothes and savagely shaking my ass (among other things). While I know a lot of people do a lot more crazy things than that for a living, this was very new ground for me.

Colette introduces me to the girls, all of whom are very nice. As she puts on her clothes, she tells us where we are going to be “stationed” that night. I am to be on the main stage. Gulp again. So, at 10:30pm, we all climb to our respective perches and begin to shake our booties. It is a very strange thing, indeed, to find yourself on a stage in a bondage club with no shirt on and a red spotlight shining down on you, and a whole bunch of jaded, cynical party-goers looking up as if to say, “OK–so now what?” and to know that if you don’t shake your ass now, well, that bad things will happen.

So the next song starts and I actuate my ass and I block out the couple hundred people in front of me and in about 45 seconds I am having the time of my life.

Anthropological Observation: Bond-age flicks play on several monitors around the club. After a while I am relaxed enough to sort of watch them while I’m onstage. Amazing. There is no actual sex in these things. Just a whole bunch of people dressed like nightmares, wearing gas masks, spanking each other and binding each other’s genitalia tightly until it turns all colors of the rainbow. But no sex.

The time flies. At 1 in the morning, Colette comes by and tells me I did an incredible job and hands me an envelope full of money and asks me if I can come back the following week; she’s going to fire the other guy.

Sure, I say. And with that I head up to the sweaty, naked dressing room with three girls.

After toweling off and putting on street clothes, I come down just in time to catch the infamous announcement the DJ makes every night at closing, which goes like this: “If you are not working here or sleeping with someone who works here, you must get out now.” I am hanging out simply because I can, when I see a minor squabble occurring near the bar. It is Yvi. She is arguing with one of the bouncers and pointing with emphasis at me. He turns around and looks at me: “Is she sleeping with you?” I am the definition of nonplussed. “Sure,” I say. Why not?

Anthropological Observation: A heterosexual male dancer does not get as many offers for anything resembling “normal” sex as one might think. Here’s what I mean. The female dancers that I worked with almost always had to have a bouncer nearby, because inevitably some jackass who’d had a few too many would come up and proposition carnal acts or attempt to grope, etc. Not so in reverse. Where guys will approach a female dancer and just lay (as it were) everything right out there in the open, girls just stare. Not once did a girl come up and proposition me. They would stare. I would see a girl maybe 40 feet away, leaned up against a rail, staring directly at me for hours. But they would never approach. Occasionally, those under the influence would approach and smile chemically, but if I so much as looked or smiled back at them, they would giggle and run off. Over the years, I was approached by a few men who wanted things as varied as my participation in a gay bachelor party to watching me have sex with their wives, which wives, by the way, if they were there as well, stayed a good distance away and waved eager acknowledgment when their husbands pointed them out.

None of these offers were accepted.

So on nights when a girl would sort of latch on to me basically because there was no one else to latch on to, and find herself with no place to go and no way to get there even if there was someplace to go, I would, in a very Christlike gesture of compassion, take in a stray or two. Or three. Yvi was such a case. She stayed at my apartment for three days until her flight back to Hamburg. She was a very nice girl and I think very pleasantly surprised to find I was a very nice, normal guy with a graduate degree who just had an unusual job. Others were not quite so understanding.