Phone sex is a multimillion dollar a year industry — I just don’t get it. Phone sex just doesn’t do much for me.

I’ve tried — God knows I’ve tried. Inevitably I start laughing. The absurd mechanics of trying to remove my pants and deal with God-knows-what while holding a phone is enough to kill the mood for me right off. But hey, that’s just me, and I’m obviously in the minority.

Since I couldn’t figure out the allure of phone fucking on my own, I thought perhaps I should enlist the help of a friend of mine, Divina, who has worked in the phone sex industry for many years. I figured I could spend some time with her, interview her a bit, listen to some calls, study her habits, and then document all of my findings in an essay of extreme sociological importance.

I hadn’t seen her in quite a while, so I called her up, told her what I was doing, that I’d like to hang out with her while she worked the phones for a day so that I might lift the veil from the face of this secret world, exposing the truth of whatever lay beneath, and tell the story to the world.

“Yeah, whatever … you got any booze?” was her reply.

I affirmed the presence of liquor in my cupboards, and she said she was on her way.

END_OF_DOCUMENT_TOKEN_TO_BE_REPLACED

2a :  heavy with or as if with moisture or water <the sodden ground>

b :  heavy or doughy because of imperfect cooking <sodden biscuits> 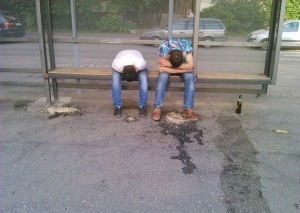 All I ever needed to know about the system, I learned in Spanish-language traffic school.

The letter arrived on my desk Saturday afternoon, but I didn’t get around to opening it until after midnight. It was from the Santa Clara County Municipal Court District. Although the actual text has been lost, the general tone of it went something like this:

The date for completion of traffic school has passed. In truth, we don’t give a fuck about the points on your record or the increase in your insurance. To us, you’re just another zit on the ass of decent society. But in a Christ-like gesture of mercy, we’re giving you one last chance. If evidence of completion of the course is not firmly in our claws by noon Monday, your fees will be forfeited, the case will be closed, the DMV will be notified of the conviction, and the next time you come to Santa Clara County, we will throw your insubordinate little ass in the cooler until you rot. Do you understand? Rot!

Hmmm. Traffic school on Sunday. I immediately began to work the phones and the Web for a traffic school offering driver’s improvement courses on the Lord’s Day. Once on the Net, I quickly found such a course — in Juneau, Alaska.

Perhaps, I thought, I should stick to the local yellow pages. And after more than 23 unsuccessful calls, I finally found a course being offered down in the Mission District here in San Francisco. After I spoke with the woman on the phone, two things stuck out about the course. First, it was being held in the back room of a bar called El Gordo Loco. Second, it was going to be taught in Spanish.

Now I’m as Anglo as they come. But what the hell? I had a couple of semesters of high school Espanol under my belt, and besides, I didn’t really need to understand what was being taught. All that was required by the Santa Clara authorities was that my reckless ass sit in a state-approved seat for at least eight hours, and that I get at least 60 percent correct on a multiple-guess test. No problema. I signed up.

END_OF_DOCUMENT_TOKEN_TO_BE_REPLACED

Even when I still believed that Santa Claus was an actual dude with an actual mailing address inside the Arctic Circle, with an actual toy shop at the same address staffed mostly by elves, blah blah blah, I felt, deep down in that dark and vacant space where my soul should have been, that Things Weren’t Right.
Even as toddlers, children understand that there are scary monsters [see The Uses of Enchantment by Bruno Bettelheim and that study where children were given rewritten versions of fairy tales with the scary monsters taken out, and the kids got all pissed off and attacked their teachers’ kneecaps].  Rugrats know that evil lurks, and they resent the hell out of patronizing adults who tell them otherwise.  I certainly did.  Which is why the unipolar morality of the Santa story never really sat well with me: goodness is ostensibly rewarded, but evil goes completely unpunished.  All year long, the promise of every materialistic dream a child may have coming true on Christmas morning is dangled in front of the child’s beady eyes on the condition of “good” behavior during the rest of the year.
I always assumed there was some kind of sliding scale of goodness vs. toys spectrum: if your behavior was superlative and Christ-like all year long, then you get absolutely everything on your list, and perhaps even a few bonus toys.  If you were a minimally decent person for, say, 8 months out of the year, but a bit of a prick the rest of the time, then you might only get a third of the things on your list.  But what of little Adolf and Osama?  What about the little kid who is an absolute bastard every goddamn day of the year?  What of him?  According to the Santa story, nothing.  Not a damn thing. Hell, Santa will even still come by your house: he’ll just leave a piece of coal.  So what?  Who cares? This means that some little fucker can run around terrorizing the neighborhood, lowering property values and ruining everybody’s lives all year long, and the only thing he has to worry about is maybe not getting as many toys as the Goody Two-Shoes next door?  Alll little Adolf has to do is stroll over to Goody’s on the 26th, when the little angel is playing with all of his benevolently hard-earned toys, whack him over the head with a board, take whatever toys he wants, and swagger back home.