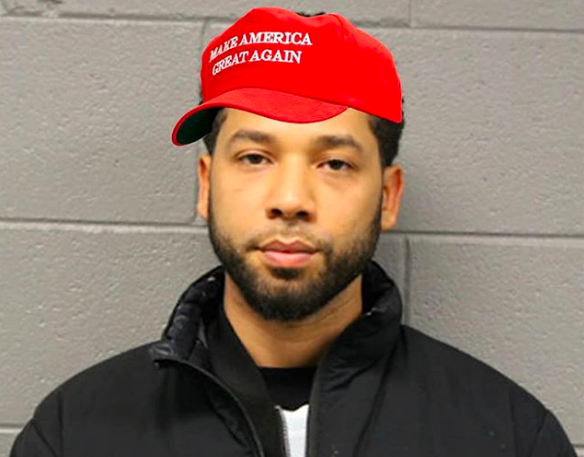 CHICAGO (JG) — As authorities laid out their case against “Empire” actor Jussie Smollett, it became clear that the deception in this incident went far deeper than anyone could ever have guessed.
“At this point, I think I just need to start drinking again,” Police Superintendent Tommy Jackson told reporters. “Y’all better brace yourselves, cuz you ain’t gonna believe this shit.  Mr. Smollett is neither gay nor black.  That isn’t even his real name.  The man we’ve been lead to believe was Jussie Smollett is really a straight white guy from Connecticut named Kevin Kevin. That is his full name: Kevin is his first name, and his last name is also Kevin.”
Police say Kevin could possibly be the whitest person in America.  The 26-year-old was born and raised in New Haven, CT, and studied acting at a community college.
Police released parts of Kevin’s confession: “I knew I could never break into professional acting the traditional way, so I decided to take on the ultimate challenge and I created a character called Jessie Smollett, who was going to be a 24-year old white girl into country with big dreams.  I was going to move to Nashville, get a job at a country bar, then achieve extremely moderate success as a professional singer. But I did not want to spend three years or however long it would take in heels or cowboy boots and daisy dukes. So I changed the spelling to Jussie and made him a gay black guy.  I moved to Hollywood and for several years lived 24 hours a day as a gay black man.  I had an entire life.  Some of the sexual parts of the dating life I wasn’t too crazy about, but even that was better than wearing heels.  Anyway, I eventually started to believe that I really was a gay black guy named Jussie Smollett, and I became frustrated with the stagnation of my acting career.  I decided that if I could convince the entire culture that I was not only gay and black, but that I had been the victim of a hate crime, then people would have to acknowledge the greatness of my acting ability.  So I did what I did.  And when Reverend Al and Kamala Harris showed up, I thought, “You did it, Kevin. You actually pulled it off.”
“Holy fucking shit,” said Superintendent Jackson, as he took another huge slug from a whiskey bottle on the podium and shook his head in disgust.  “His attorney say that Kevin is refusing to make any additional statements unless he is nominated for the Best Actor Award at this years Oscars.  And now we got to figure out what to do with this case. Is this a white guy that paid two black guys to beat up another black guy who is secretly white?  Shit.  Who knows?  I think everybody involved is guilty of numerous hate crimes and should be shot.”
Adding to the confusion was the discovery that Kevin once identified as a gay black man.  “If that is the case, then this whole case just imploded in a convoluted cloud of weirdness. I think everybody just walks and we forget about the whole thing.  Jesus,” told reporters before finishing the bottle of whiskey that the superintendent had brought to the podium.
“And one more thing,” slurred superintendent Jackson, “Don Lemon is a racist, idiotic jackass.  Fuck you, Don.”
The companies that make “Empire,” Fox Entertainment and 20th Century Fox Television, issued a statement Thursday saying that they were “evaluating the situation” and “considering our options.”
N.P.: “An American Dream” – Love and Rockets