We need to talk. I’ll be brief. But I won’t be nice. The time for nice has passed. The situation has gotten so out of control that only unniceness will do. Also, I am grumpy, and you know how I get when I’m grumpy. I apologize in advance for any undue grumpiness, but say also tough titty: something has to be done. So let’s get this over with. Here goes.

I swear to Christ I am going to pumpkin the next person who responds to anything that I say with, “I know…right?” Bam. A pumpkin right to the face. A gourd to the gourd. The “I know” is irritating, but asking me “right?” is downright offensive. Of course it’s right, you nebbish! Otherwise I wouldn’t have said it. Your endorsement is unneeded and unsolicited.

I’m sure you’re suddenly pissed off at me, but save it: there’s more. If you are an American in 2014 saying “At the end of the day,” just shut your word hole and walk away. That expression had achieved shameful cliche status in England by 1998. Just eliminate it from your speech and say what you really want to say. For example, instead of saying, “At the end of the day, I still think that Michelle is a vapid twat,” just cut out the cliche. Hell, cut out the “I still think.” Just be bold and speak the truth: “Michelle is a vapid twat.” Isn’t that better?

Okay. Now for the big one. This one is likely to alienate everybody I know, because virtually everybody I know does it…that’s what makes it so insidious. “It is what it is.” God. This is, perhaps, the most existentially useless statement ever uttered by a soccer mom. I can only assume that what people like about it is that it is a balanced sentence. Someone recently told me that it is Zen. I assure you it is not. It is to Buddhist thought what Hootie and the Blowfish was to classical music.

The same thing happened in the 90s with “Let’s agree to disagree.” What a load of shit that was. Things had gotten so outrageously politically correct that nobody dared to say, “You’re just fucking wrong, you dolt.” Which I suppose is fine if you feel it necessary to be polite to idiots. But it was even too dangerous to say, “I disagree with you.” No, people were so worried that others might bruise in the presence of simple but blatant disagreement that they felt compelled to put a happy face on the thing. God forbid we be perceived as even slightly confrontational. Hence, “we agree to disagree.” Meaningless at best, cowardly at worst. And now, here we are. “It is what it is.” First of all, no shit. Of course It is what It is. How the hell else could It be anything else? Unless you want to take a more philosophical approach, in which case no, It very likely is not what It is, because you only think you know what It is, and since your senses and perceptions are easily duped, they are unreliable and should not be trusted. Most things are decidedly not as they appear, and since you base your entire concept of reality on how things appear to your unreliable senses, then it is safe to assume that It is, in fact, not at all what you incorrectly think It is. I contend that saying, “it is what it is,” is a short cut to real thought. It’s lazy. What you should do is identify specifically what It is, and then explain Its nature and that because what we’re talking about is the thing’s nature, it is foolish to expect It to behave differently. But that is, I’m sure, far deeper than anyone who says it ever meant to go.

Oh, one more thing, as long as you’re already unfriending me. Equally as pumpkinable as, “I know, right,” mentioned supra, is asking, “Really?” two or more times after somebody says or does something that you disagree with. For example, you are talking to me, and I am tired of listening to your nonsense, so I get up and leave. And you chase after me, saying, stupidly, “Really? Really. Really?” I’m telling you…a pumpkin, right to the head, hard. 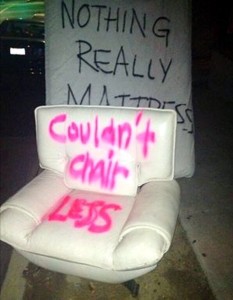